I am doing an exercise from a Big Data course I'm taking on Coursera (this exercise is for experimenting with a big-data problem and is not for any credit or homework) , the assignment was described briefly:

Your task is to quickly find the number of pairs of sentences that are at the word-level edit distance at most 1. Two sentences S1 and S2 they are at edit distance 1 if S1 can be transformed to S2 by: adding, removing or substituting a single word.

I am then given a large txt file that contains about $10^6$ sentences.

The way I tried to attack this problem:

Observation $1$: If the length of two sentences is greater then $1$ then they are not at an edit distance $1$.

I used something like a curried syntax to get a hashtable that keeps a 3-touple: $(X,Y,Z)$

Where I mapped each sentence as follows:

In C# this corresponds to an object of a type

Then given a sentence - compute the two $Y$ values it would of gotten and look at buckets with length that differs at at most $1$ from this sentence length and share one $Y$ value this sentence.

Let me describe the hashing function I used to get $Y$ - 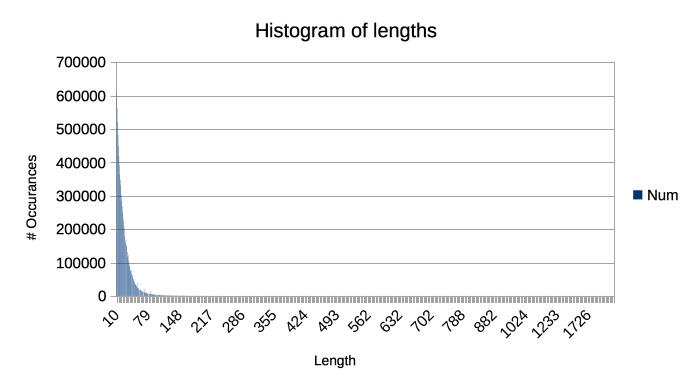 which should give some indication of the values chosen for $p$.

However - There are too many collisions - I get about $6$ elements in each bucket.

I took one example of such a bucket and I printed those sentences (I hoped they are similar so they would have a good reason to be mapped to the same bucket) by they are very different from one another. This is a printscreen of those sentences printed to the console. 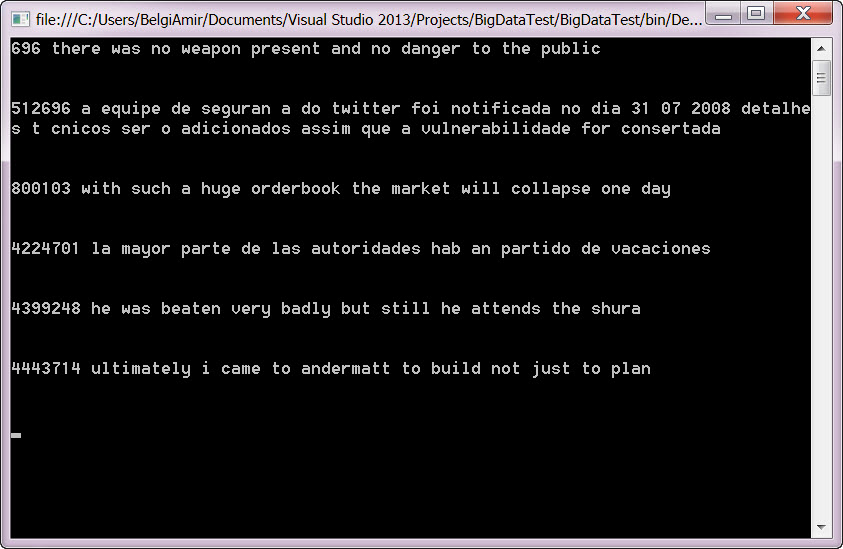 Question: Why do I get a large number of collisions ?($6$ in average on $10^5$ buckets I considered where if I had even distribution I would expect $3$ from the choice of $p$, some buckets have a few tens of elements in them)

Could the problem be that I used modulo a square of a prime and not a prime ? is it that significant?

There are a lot of things which could have gone wrong, but it is really hard to say, especially since you don't tell us the bad values of $n_l$ and $p^2$. So for now, here are some comments:

In view of this, I suggest you pick some particular experiment and compare the distribution of the number of balls in buckets to the corresponding Poisson distribution. If you find any major discrepancy (an ill-defined concept), let us know the exact values of $n_l$ and $p^2$ you used.

While 2-universal, and other ideal properties of hashing, is useful only if you are fighting against malevolent input. On the opposite, when the input is random, any function that maps equal number of keys to different bucket is equivalent good. You do not need those heavy hash e.g. SHA1. You should use some lightweight hash functions, while I'd recommend you to use more buckets, e.g. $2^{32}$, to avoid collision. C# would take care of the space, you dont need to mind it.

Finally, when people use hashing, they typically use it to speed up accession. While in your homework, hashing can be used more constructively. There exists some hash function $h_1,h_2$, which can be computed in linear time, such that the collisions between $h_{*}(s_i), h_{*}(s_j)$ hints $s_i,s_j$ has word-level edit distance at most 1.

Not the answer you're looking for? Browse other questions tagged hash big-data or ask your own question.

10
Weak hashing function for memorable IPv6 addresses
98
Why is it best to use a prime number as a mod in a hashing function?
3
Term for binary search tree using hashes?
4
Hash-Table in Practice
2
Surprisingly high collision rates when hashing a short list with few buckets
1
How to actually implement universal hashing?
3
Simple Uniform Hashing Assumption and worst-case complexity for hash tables
1
Optimal parameters for a Bloom filter