Finding all faces in a wireframe mesh

I'm trying to find an algorithm for finding all faces in a wireframe mesh. Wireframe means only the vertices and edges are given as input. There is no restriction on the number of edges a resulting face can have and the face can be convex or concave.

In a wireframe of a square-based Pyramid there are 5 faces - the base is a square and the sides are triangles.

The algorithm should produce 5 sets of edges (since there are 5 faces). One set of edges would contain the 4 edges that make up the square base and then 4 sets of 3 edges for each side of the pyramid.

It would be a bonus if the algorithm can create an edge winding resulting in all faces pointing inwards or outwards.

After conducting more research I did find a solution, but first I will examine solutions suggested by posters and considered by myself and review why they didn't work.

This was one of my first thoughts early on, but this doesn't work when you consider the following:

Unfortunately, without weighting or accounting for spatial information you'll end up running into the edge cases described below. 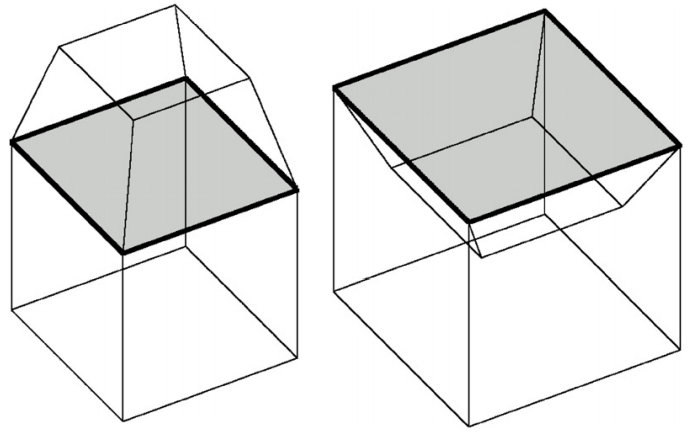 Then there are other issues like objects with distinct subgraphs, holes, and ambiguous face loops. 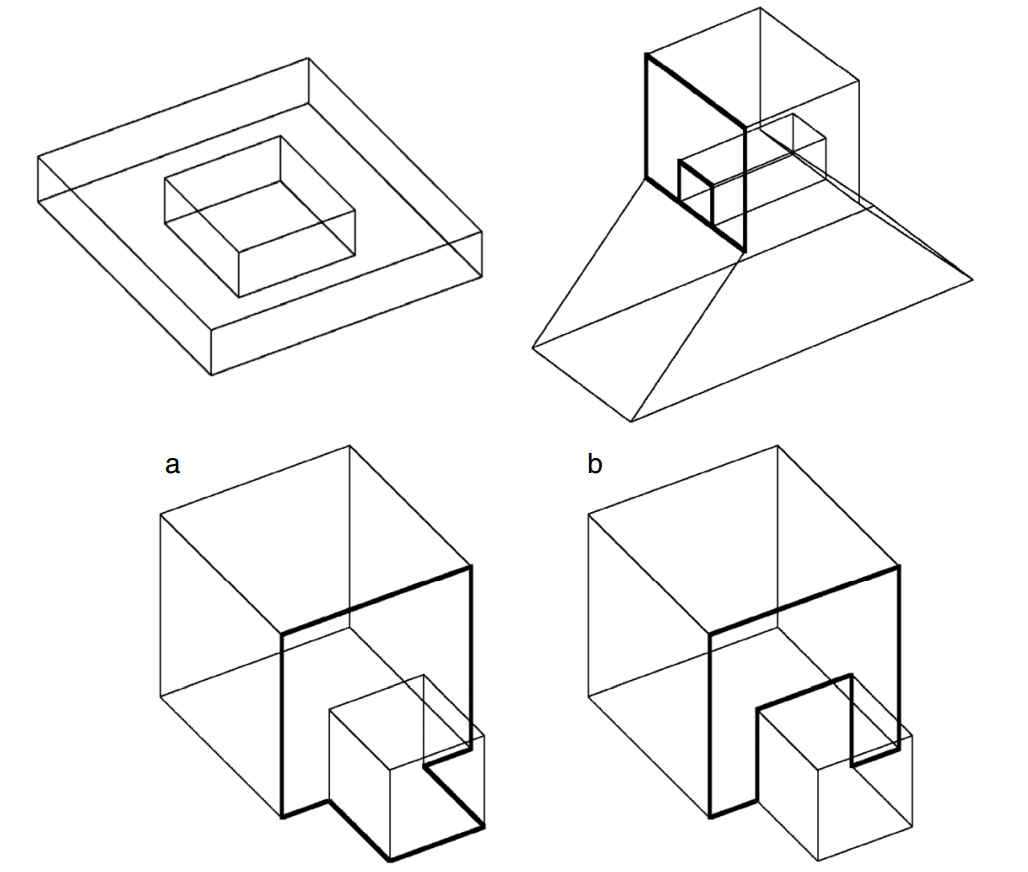 While researching I found the paper: A new algorithm for finding faces in wireframes by Peter A. C. Varley and Pedro P. Company (full text here). The algorithm attempts to solve the problem for both 2D and 3D input. The solution is non-trivial: the setup alone is polynomial time.

Start by creating a set of directed edges from all edges of the graph (so the initial set is of size 2e were e is the number of edges). These sets of directed edges are stored as the vertices that comprise them and are referred to by the paper as "strings". Each string must be given a priority according to the geometry around it (e.g. there will be a different priority assigned depending upon if it touches a triangle or quadrilateral).

You then exhaustively attempt to merge the strings by finding ones that start were another one ends. You do this by picking the highest priority strings first.

When merging strings you remove the original strings from the set and add the merged version back in. When the merge is preformed a new priority must be calculated using the existing priorities and spatial information about the strings themselves (the spatial calculation differs depending upon if your running the algorithm against 2D or 3D input).

Strings are removed from the set if their first and last vertex match (that means a loop was found). You continue repeating the algorithm until the set is empty.

Here is the complete algorithm copied directly from the paper. Hopefully the description I gave above helps a bit. The paper is very well written and its a good read for anyone interested in the topic.

Some steps in the algorithm come down to guesswork and assumptions about the input. For example, step #3 says to "choose a trihedral vertex", but if there is no trihedral vertices (e.g. octahedron or icosahedron) then the paper suggests breaking the symmetry by assuming that an arbitrary triangular loop of edges is a face.

According to the paper, the current face-finding algorithms generally fall into four categories: exhaustive search approaches, pseudo-random approaches, shortest-path approaches, and heavily mathematical approaches. It does a good job citing other possible solutions along with their advantages and disadvantages.

Keep in mind that this algorithm acknowledges that it still produces incorrect output for certain input. However, this is still an improvement over the previous best solution which fails for even more input.

Not the answer you're looking for? Browse other questions tagged algorithms graphs enumeration graphics polygons or ask your own question.

15
Testing whether a tetrahedron lies inside a Polyhedron
4
An algorithm to find the area of intersection between a convex polygon and a 3D polyhedron?
0
Generate triangular surface mesh of convex hull spanned by 8 points in 3D-Space
1
How to solve the minimum-cost flow problem on a complete graph, with a concave cost function of flow for each edge?
2
Is there an algorithm to determine which face of an n-dimensional hypercube is closest to a given point in $O(n\log(n))$?
3
Skyline problem with triangular buildings